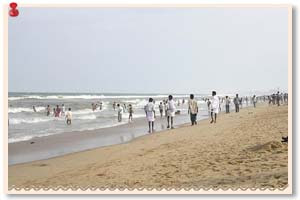 Chennai, the city situated at the Coromondal coast of Bay of Bengal is often recognized as the 'Detroit of India' and the 'Gateway of South'. The fourth largest and one of the prosperous cities of the country, Chennai is an attraction in itself. It is the capital of the state Tamil Nadu, and fifth most populous city of India. It would not be hyperbolic to designate it as the liveliest city in the entire South India. The city has its own unique charm, which sets it aside from the rest of the big cities of the country. A great confluence of rich tradition, varied heritage, modern amenities and technology, Chennai is the vibrant place in the vicinity of nature. This unmatchable blend of culture and modernity has designated Chennai with one such city in Tamil Nadu, blessed with an extreme treasure of tourist attractions. The sightseeing tour around the ancient city of Chennai, will completely sweep you off your feet. Besides, there is such wide diversity that you will be amazed at its existence. The picturesque beauty of the city includes beautifully carved temples, serene beaches, colonial monuments and much more. Still wondering about the compact city imbibed with many colours? Scroll down to know more about the alluring city Chennai!

Fort St. George
St. George Fort, located on the banks of Bay of Bengal, was built by the British East India Company in 1640 AD. The fort is believed to be the first establishment of the British in India. The military architecture marvel, it was erected as a trading post.
Freemasons Hall
Situated at the Egmore area of Chennai, Freemasons Hall is the living example of the cultural and traditional heritage of the people who inhabited the ancient city of Chennai, formerly known as Madras.

Senate House
Senate House of Chennai is located at the campus of University of Madras, near the Marina Beach. The House was constructed under the supervision of one of the greatest architects of the 19th century reflecting truly an architectural marvel.

Valluvar Kottam
Valluvar Kottam is built to pay homage to the great Tamil Poet and Saint Thiruvalluvar who wrote 'Thirukkural'. The monument sits at the place where an unused lake existed in past. The monument is in the shape of a temple chariot and contains a lively and splendid statue of the poet.

War Memorials
If you want to explore the vibrant heroic past of India, visit the War Memorial of Chennai. The memorials are dedicated to those soldiers who laid their lives for the welfare of the nation as well as those who died as martyrs, serving their nation.

Places of Worship in Chennai

Churches in Chennai
Santhome Cathedral Basilica
A sacred shrine of utmost faith among Catholic Christians, Santhome Cathedral Basilica was built during the Portuguese settlement in the region in 1600s. Embraced with Neo-Gothic style of architecture the church is a peaceful pious place. Must visit!
St. Mary's Church
The St. Mary Church lying at the famous monument, Fort St. George is an excellent place to visit and make your trip to Chennai worthwhile.
Velakanni Church
Velakannai Church, called the 'Mecca of Christians' is the principal shrine of Mother Mary where she is admired and revered as the 'Lady of Health'. Take some time on a trip to Chennai to see the striking church situated at the Elliot's Beach at Basant Nagar.
Temples in Chennai
Adeeswar Temple
The shrine of the first omniscient teacher of Jainism, Rishbhadev or Adi Jain, Adeeswar Temple also known as Polal Temple is situated just 9 km away from the city. It would be ever-memorable and cherishing experience to visit the temple and offer the words of worship at this holy place.
Kandaswamy Temple
The Kandaswamy Temple built in 11th century by Chola Kings is a sacred shrine of Lord Kandaswamy or Lord Shiva and Lord Muruga, son of Lord Shiva. The temple is also a destination to celebrate Skandasasthi and Parhuni festivals.
Kapaleeswarar temple
The Kapaleeswarar Temple situated at Mylapore in Chennai is a prime shrine of Lord Shiva. The temple receives utmost reverence from the residents of Chennai. The temple depicts Goddess Parvati worshipping Lord Shiva in the form of a peacock.
Parthasarathy Temple
The temple situated at Triplicane pays homage to Lord Krishna, an incarnation of Lord Vishnu for playing role of the charioteer of the brave warrior Arjuna in the battle field of Mahabharata.
Vadapalani Temple
The temple is primarily devoted to Lord Muruga, though the premise has number of deities of other demigods also. The temple is a 125 years old construction and has become a place of celebration of Skanda Sasthi and Panguni Utthiram.
Beaches

Covelong Beach
Covelong Beach is one of the finest beaches on the coast of Coromandel, located at a distance of 40 km from Chennai. The beach embraced with the picturesque locals strives to give you the perfect retreat away from the hum drum of the city life.

Elliot's Beach
Located towards the south of Marina Beach, Elliot's Beach is one of the cleanest beaches and an extremely calm and tranquil place in the city of Chennai. The beach is known as 'Bessei' among natives of the city.

Marina Beach
Marina Beach is situated at Kamaraj Road, just 3 km away from the city Chennai. Extending to a length of 13 km, it is considered to be second largest beach of the world covering the region from St. George Fort to Mahabalipuram.

Amusement Parks
Bring out the child-like within you by visiting the amusement parks of Chennai. Dash-N-Splash, Dplphin City, Kishkinta, Little Folks, and MGM 'Dizee World' beach Resort are the most popular amusement parks of the city. Must visit!

Discotheques
Gain an insight into the nightlife and youthfulness of Chennai with the discotheques of the city. To help you find a good discotheque, we will suggest you HFO, Dublin, Pasha, The Park, Flame Le Club, Gepffrey's and Zara-Tapas Pub which are the most happening ones.

Water Sports
Wake up the adventure-freak within you and head towards Chennai. A number of water sports like Tarsha Water Sports, Muttukadu Boat House, Pichavaram and many more are waiting for you!

Cinema Halls
Chennai is home to the Tamil film industry Kollywood. Enjoy the Tamil movies in number of multiplexes, Cineplexes and PVR cinemas in the city. You can enjoy here movies in other languages as well!

Shopping Malls
The City Centre, Spencer Plaza, Gold Mall, Express Avenue and many other giant malls serve the city. These shopping malls have variety as well as quality. Have a go and grab all what you wish to buy!

Crocodile Bank
A visit to the wildlife sanctuary rich in crocodiles, alligators and several other reptiles would be adventurous as well as fulfilling. It is just 44 km far from the capital city Chennai and in the vicinity of Mahabalipuram.

Mahabalipuram
Former Mamallapuram, the place is around 60 km far from Chennai. Its shore temple and carving are the most alluring ones. A preferred tourist destination, it forms 'Golden Tourism Triangle' with Chennai and Kanchipuram.

Muttukadu
A popular picnic spot Muttukadu is situated in Kanchipuram, 36 km away from Chennai. Here you can enjoy backwaters, boat house and various water sports surrounded by lush Greenland and coconut trees.

Pulicat
The small seashore town, Pulicat is located in Thiruvalluvar district about 60 km far from Chennai. The place is known for its beaches, Dutch cemetery, bird sanctuary and Pulicat Lake.

Thanjavur
The 'rice bowl' of Tamil Nadu, Thanjavur is famous for its grand Chola temples. The paintings and architecture is worth a look. Have a visit!
Note:
Guide can be arranged at an additional cost. Quote for Chennai Tour and Sight Seeings !!!
Arrangement of guide is subject to availability at the time of your confirmed booking with full payment.